You know how I know that the Fuko arc is truly over?

That cryptic story about the girl and her little friend made out of junk was the very first scene in this episode. I’m hoping that my opinion of it changes as it becomes more relevant to the story, but at the moment it’s just sort of annoying seeing these little clips of the girl and the junk friend.

I’m pretty sure it has something to do with the play that the theatre club ends up putting on, or something like this. There’s probably more to it than that too, so I’ll try my best to pay attention.

Okazaki is walking through the hallways at school with Sunohara, when he tells Sunohara about a quiet, beautiful girl in the library who sometimes gives food to strangers. He runs to the library, but fails to get Kotomi’s attention, even after yelling and knocking a bookshelf down. Sunohara leaves, and Okazaki goes inside and talks to Kotomi. Together they clean up Sunohara’s mess and Okazaki decides to introduce Kotomi to Nagisa and the theatre club.

And so Kotomi is introduced to Nagisa. Probably two of the most timid girls in anime, face to face. They sort of stumble through some conversation, and eventually Kotomi notices Nagisa’s Big Dango Family drawing. Kotomi loves the Big Dango Family – sealing the deal on their new friendship.

Okazaki then takes Kotomi to meet his other friends at various times – Kyou, Ryou, Tomoyo (in bear costume), and also the lunchlady, or bread shop lady, or whatever you’d call her.

After school, Kyou, Ryou, Nagisa, Kotomi, and Okazaki all meet up in the theatre clubroom. Nagisa is happy to see so many people in the room, but Kyou mentions she isn’t interested in joining the club. After a while, Kotomi hones in on the sound of a violin from a nearby music room. Everyone follows Kotomi there, where the violinist offers Kotomi the violin to play. Kotomi then proceeds to shatter everyone’s eardrums, the lights, and windows with her performance.

The episode ends with a mysterious moustached man in a trench coat looking at the school from a distance. 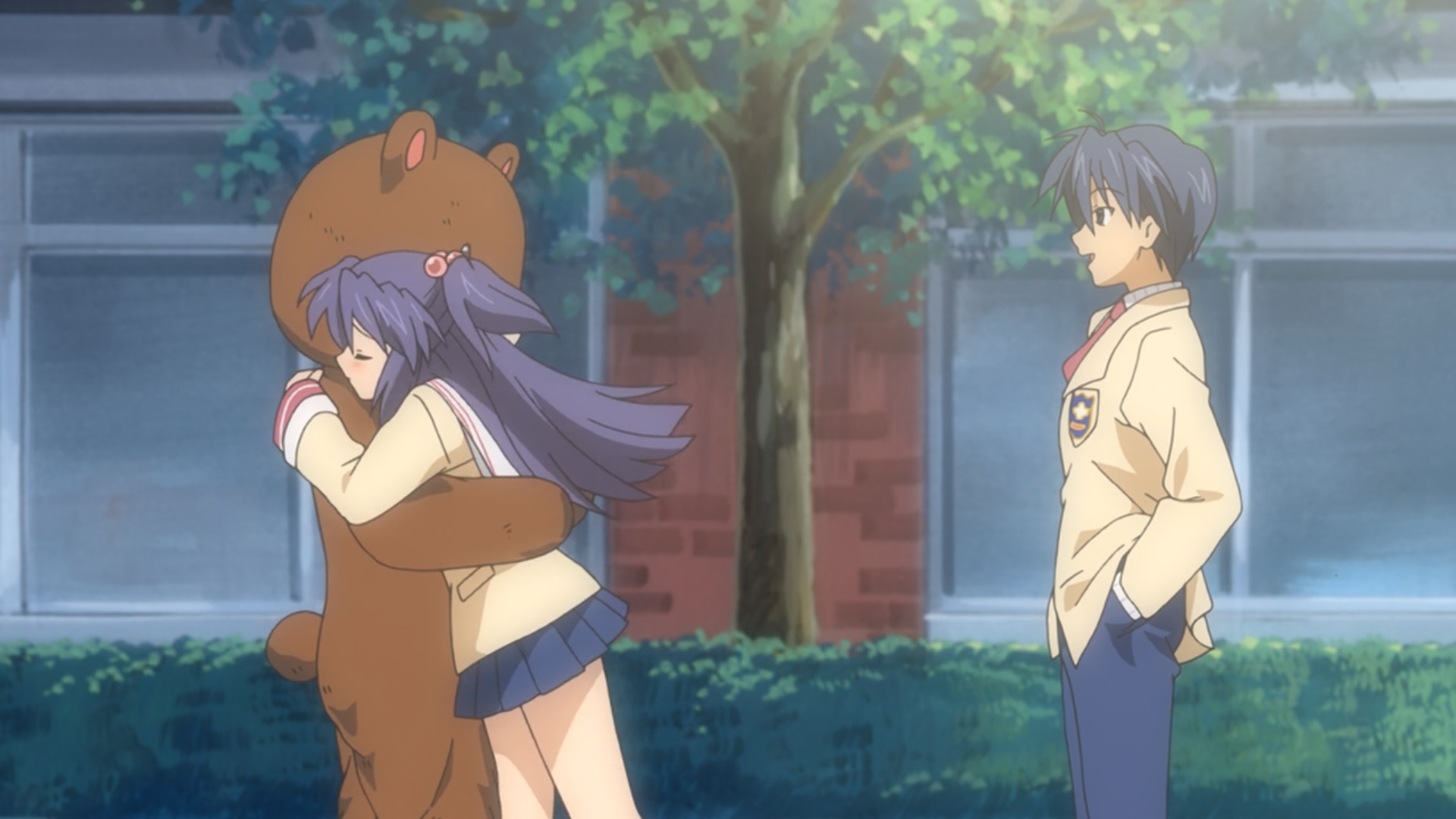 So it looks like we have begun Kotomi’s arc of Clannad!

I think the scene with Kotomi and Nagisa meeting each other was one of the cutest scenes in anime. They’re both just so awkward and timid around people they don’t know, to see them both faced with each other was both cute and funny. At one point Kotomi asks Nagisa if she’ll have to cry (for the theatre club) and Nagisa says that she has to if it’s part of her role. Kotomi then says she doesn’t want to cry, and Nagisa takes a comedic hardline stance on this issue, saying that if it’s part of Kotomi’s role she’ll have no choice. Kotomi then asks Nagisa if she is a bully.

Ahh, they’re just so cute together!
This was a scene I never knew I needed until now. 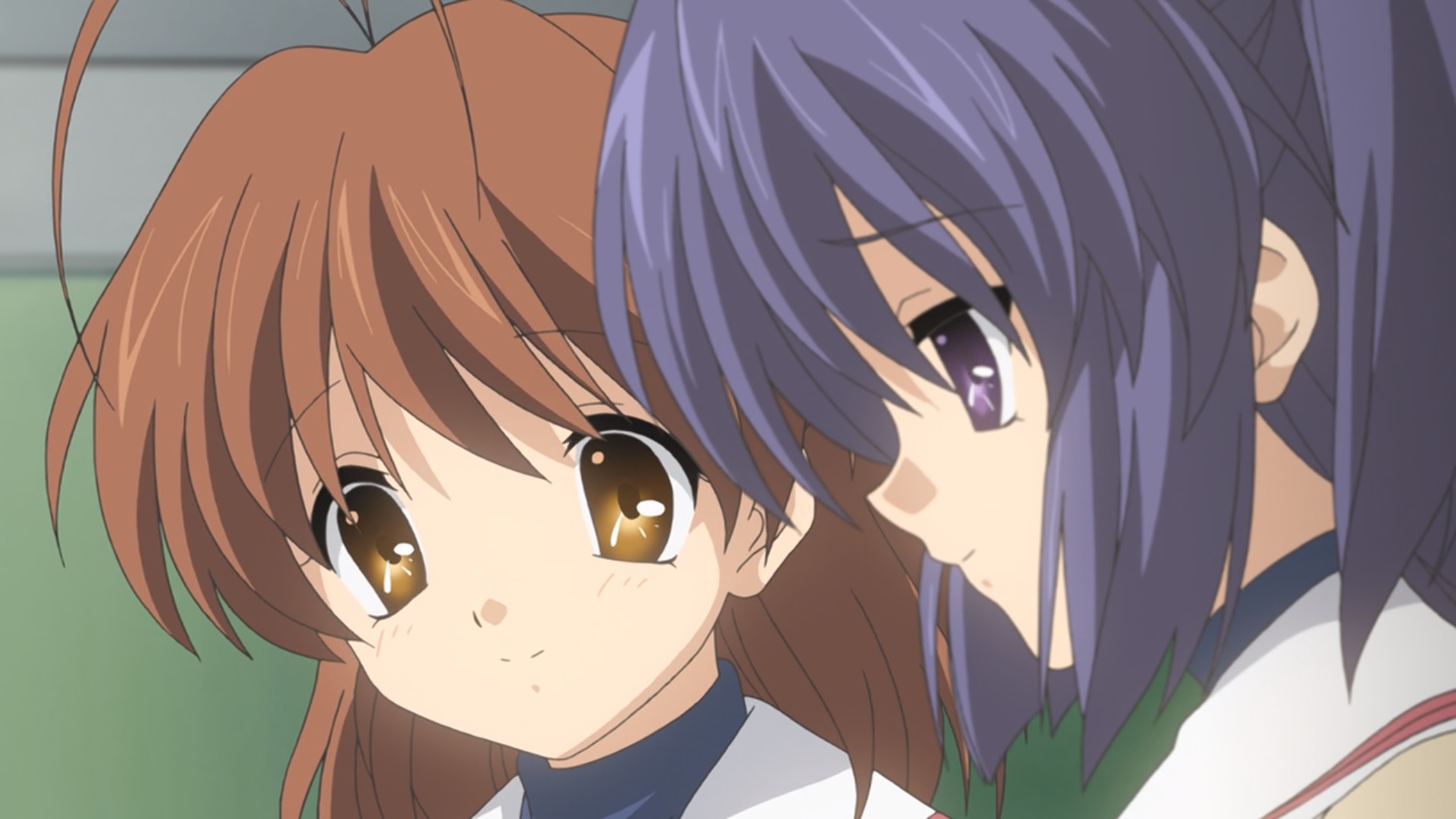 I forgot Kotomi was a horrible violinist, so I was actually expecting her to play some genius-level masterpiece there. What a fun shock that was! Nothing like the violin in her theme song, which I was actually expecting her to play. Kotomi seemed satisfied with her performance though, with a joyful look on her face similar to the one Fuko would make when she saw a starfish.

Story-wise, we’ve got two leads. First is the mysterious man at the end of the episode, and second is Kotomi’s parents. The lunchlady brought up her parents, and Okazaki asked her about them, but Kotomi seemed a bit uncomfortable talking about them. So we’ll have to keep an eye on those topics as I’m sure we’ll find out more next episode. I’ll stay away from speculation for now, although I have a few ideas as to what will unfold here.

We’re back to some nice relaxing Clannad content. Some cute moments, some funny moments, and more absolutely stunning visuals. I love Fuko, but I am really glad that we’ve moved past that arc and onto a new one. It’s just so refreshing to move onto another characer, and Kotomi is just as cute as Fuko was.

Of course, Nagisa is the cutest of them all.