Continuing on with Date A Live, we are now at the second season!
How will this season pan out compared to the last one?

For the record, while this is technically a rewatch, I don’t remember anything from this season. Maybe my memory will be jogged at times though!

Shido is officially a spirit babysitter, and has to constantly check up on Tohka and Yoshino to make sure they are OK. If they aren’t, then their spiritual powers will return, allowing them to cause some trouble as well as alert the AST as to their position.

After a little trouble from both Tohka and Yoshino, Shido gets a message from Origami. Origami had just received a 2-month suspension from the AST for her actions at the end of last season, where she stole an experimental AST suit and wrecked havoc on an amusement park. It seems she got off lightly thanks to a man named Mr. Westcott. Shido meets up with her and they go to a toilet so that they can speak in private about the AST and whatnot.

Back at the apartment, Yoshino is watching her favourite TV drama. Tohka watches parts of it and after seeing a packed suitcase in Shido’s room, gets the idea in her head that Shido has had enough of her and is leaving, just like the man in the TV show. She runs outside to find Shido, who eventually manages to calm her down with some bread. He then leaves again to meet with Origami as she invited him to shop for some things for their upcoming school trip.

The TV show once again convinces Tohka that Shido just gave her some food to shut her up, and that Shido is actually cheating on her. She once again runs out, and sees Shido with Origami. Her spirit powers return, and once again Shido has to face her and convince her that he’s not leaving her. He kisses her once again to seal her powers, but not before the AST was alerted to her presence for a brief moment.

This brings Tohka’s existence to Mr. Westcott’s attention.
We also see Kurumi on a rooftop, being her usual edgy and awesome self. 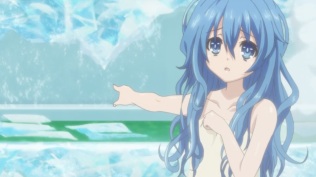 This was a really funny episode. Even though there was no Ratatoskr assisted dating, I thought it was hilarious how everytime Tohka saw a scene from the TV drama, it was something that applied to her somehow. The part where the guy on the TV show basically said “Ha, I just got her favourite food for her, and just like that she was fooled”. The one thing I will say about all of this though is that I’m surprised Tohka still thinks that Shido could be as sleazy as the guy in the TV show, despite knowing him for a great deal of time now. Shido’s never intentionally done anything to hurt her, but she always seems to think he’s on the precipice of completely hating her and leaving her forever. I guess Origami has something to do with it.

Kurumi mentioned something about finding the person who was behind the creation of all the spirits. Something like that, at least. I wonder who that might be, or if we’ve even been introduced to them yet. While Kurumi was a villain to a degree last season, I can already tell that she’s going to become a turncoat antagonist and end up helping Shido at some point. In fact, I guarantee she will.. probably.

It’s looking like next episode will feature the school trip, so I’m guessing we’ll get to see some more swimsuits? I also think that something is going to happen during the school trip. Mr. Westcott, what are you up to?

Oh, and one final point. This episode had an Origami panty shot, when she was having her secret meeting with Shido. Considering there have been no panty shots since S1E2, I was surprised to see it. Maybe they’ve turned a new leaf with this season? Or maybe this will be the only one for the entire season, we’ll just have to wait and see.

This was a fun episode that plants the seeds for an interesting story. Kurumi hunting the first spirit, Mr. Westcott, and more immediately, a school trip. Plenty of storylines to look forward to!

Other Date A Live Posts