Well, it was nice to hit the second season for a single episode.
But now we are back in the first season. I guess I’ll have to wait a bit longer to actually hear the second season’s OP (because I forget what it is).

Kyon had created flyers to post on bulletin boards in the school (to appease the student council). The flyers basically say that people who need advise can come to the SOS Brigade. In the meantime, Haruhi has created a new logo to put on the SOS Brigade’s website.

The day after the logo is uploaded to their website, Asahina brings a girl named Kimidori to the clubroom. Kimidori says that her boyfriend, the computer club president that Haruhi had blackmailed previously, had been missing for several days. He lived alone, and she was concerned. Haruhi accepts the job and the next day the club heads over to his apartment. They get into the apartment after Yuki unlocks the door for them to find an empty room. Afterwards they leave and Haruhi goes home because she is hungry.

The rest of the club go back into the apartment, where we find out that there is an enclosed space there. Yuki takes them to the enclosed space and they teleport into a desert inhabited by a “camel cricket”, which is actually an information entity similar to Yuki, only it served a different primary information entity. Koizumi and Yuki take down the cricket, saving the computer club president.

We find out that the logo Haruhi had created actually served as some sort of conduit by which the information entity could enter people’s minds, which is what happened to the computer club president. We also find out that 5 more North High students had viewed the logo prior to Yuki changing it slightly. Finally, we find out that the computer club president never actually had a girlfriend, and Kyon questions whether Kimidori was actually manipulated by Yuki in order to get the club to investigate.

I admit I was a little surprised with this decision, but I’ve come to accept that Yuki Nagato is actually the best girl of the anime, and not Haruhi like I had originally thought. At least, that’s what I think so far. I just can’t help but take Yuki screencaps when I see them.

Anyways that’s not actually the favourite moment, although it does involve Yuki.

There’s a quick scene when Kyon enters the clubroom after school. He assumes that Asahine will be there, because normally she is the first one. But instead, Haruhi is there.

“She’s more of a room fixture, so don’t count her as a member.”
– Kyon

Just a funny little quip by Kyon that I enjoyed in that moment. 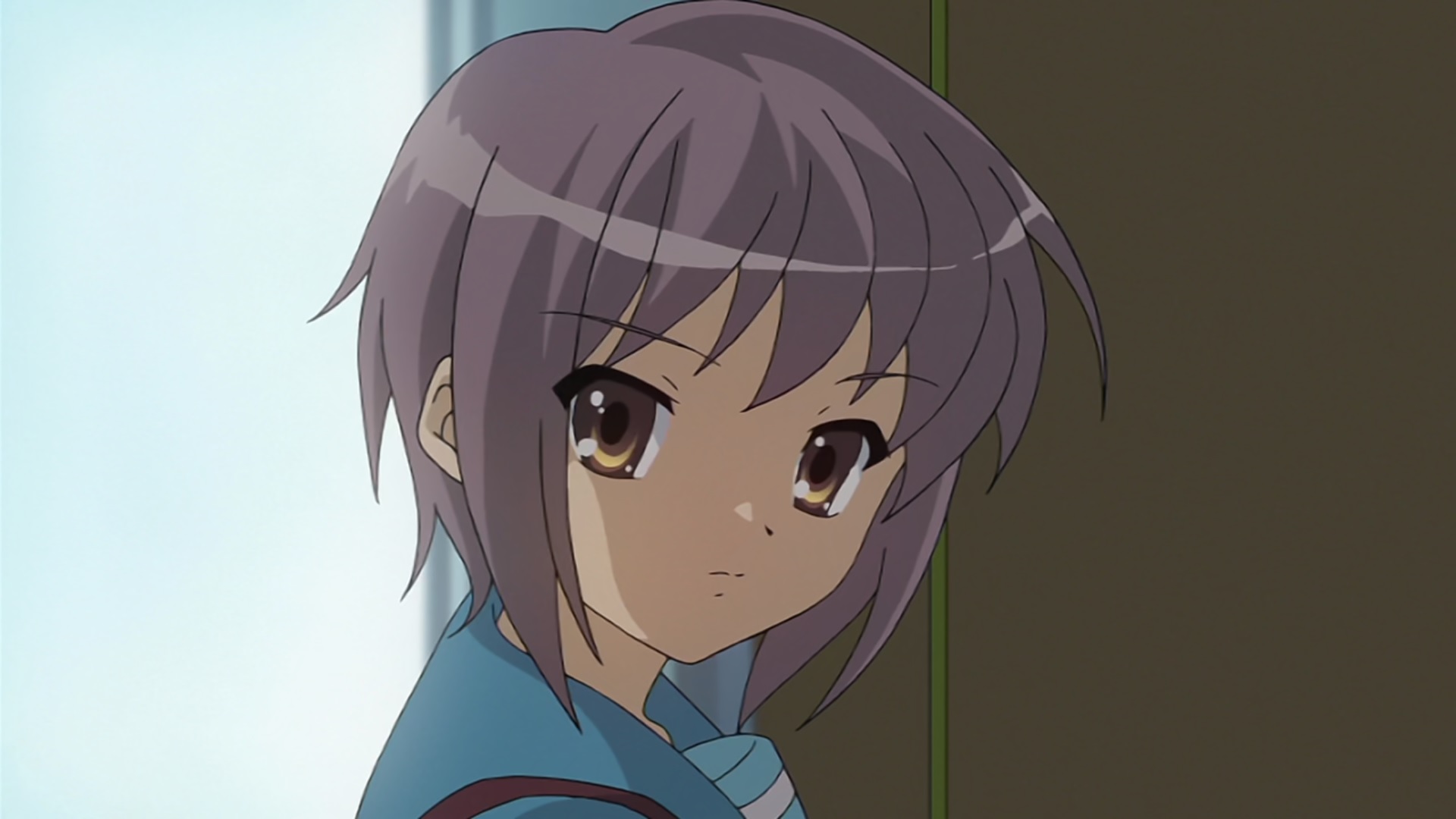 When fighting the camel cricket, Koizumi shouts out the names of the Full Metal Panic! sequels: Fumoffu, and then Second Raid. Just a cool little reference there, I was happy to have caught it because I definitely wouldn’t have the first time I watched through Haruhi.

The fight itself was also awesome, although it didn’t last too long as Koizumi and Yuki made short work of the camel cricket. Still, the animation on these supernatural battles is awesome. I hope to see more of them. 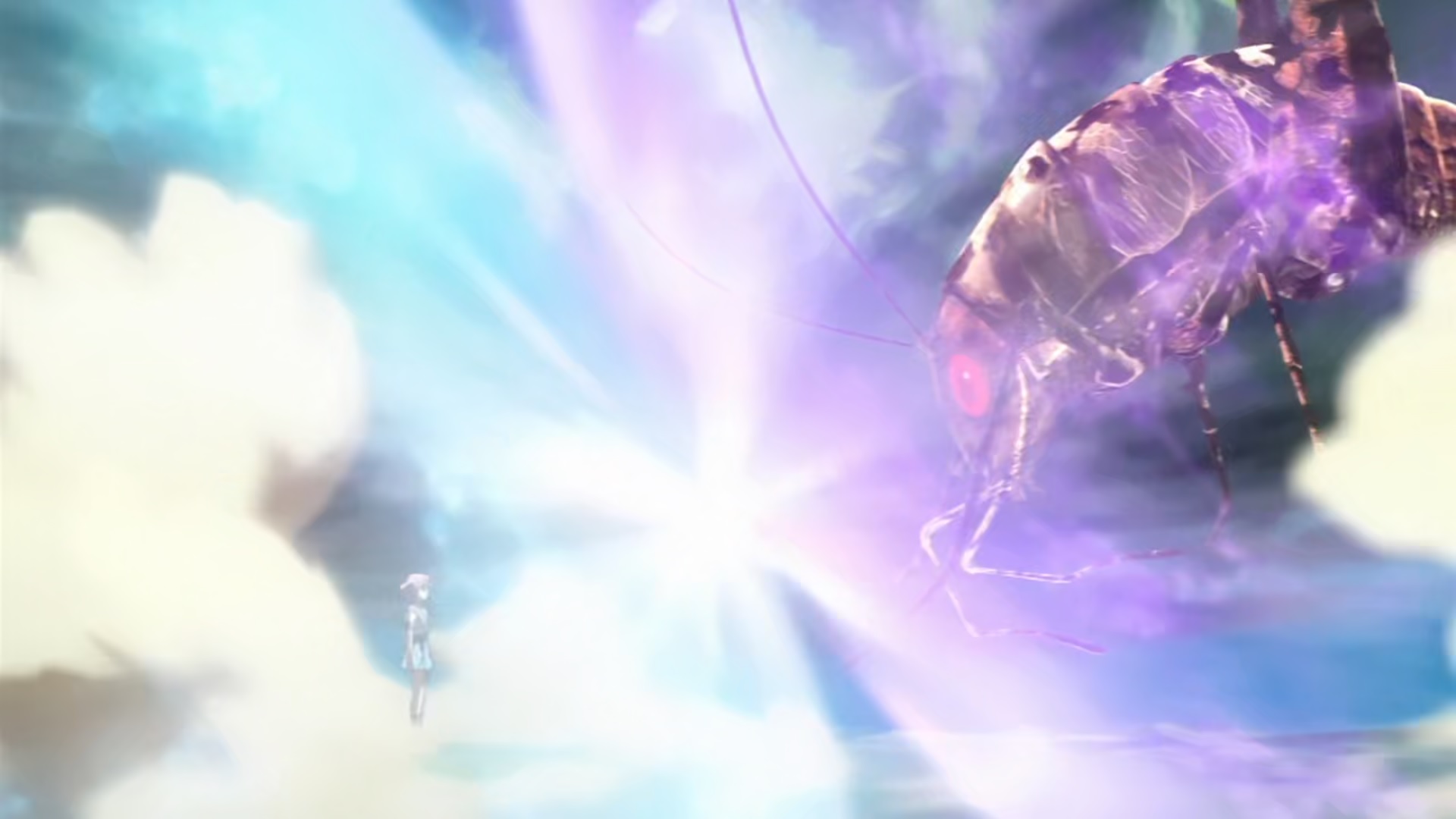 I’ve been trying to keep close attention to how things play out in this chronological order and I couldn’t help but notice that Kyon still acts skeptical about Haruhi’s abilities, which seems pretty odd at this point. Considering this is chronological order, that means the dream has already happened, and Kyon knows that the dream was real, because of how Haruhi wore her hair the day afterwards.

I almost wonder if they threw in some of the lines that Kyon was thinking in this episode in order to appease the broadcast order or something like this. I don’t even know the order in which they actually created the episodes, or how that all went. But the way Kyon was skeptical felt odd to me, considering all that he has seen – especially when you consider the chronological order and all that has happened so far.

This was a pretty cool episode. I’m always down for supernatural fights, ever since Yuki fought with that girl whose name escapes me now… Ryouko? This one was shorter, but still very cool. Definitely would like to see more supernatural fights. Maybe these other North High students who saw the logo will prompt this?

That said, the next episode in the chronological order is actually episode 6.
I wonder how it will play out!