Time to continue the fun with episode 6 of Date A Live!

Tohka and Yoshino wanted to go to hot springs, so Shido asks Kotori for permission. Once he gets the approval, they set out.

At the same time, the AST had planned to go on a tour of various hot springs around the country – but the trip was cancelled due to an increased alert level. Instead the best they can do is go to the nearby hot springs (same one that Shido is going to). The AST captain, angry about the cancelled trip, is determined to make it to those hot springs.

Ratatoskr detects AST on the move as Shido and the spirits are on their way to the hot springs. Thinking that the AST is going after the spirits, Ratatoskr begins using some non-lethal stops to prevent the AST from making it to their destination. Collapsed bridges, fake roads, walls blocking their path – all sorts of methods. But the AST captain will NOT let anything get in her way, so they keep on going.

This causes Ratatoskr to go all out, throwing subtlety out the window. Food stands begin shooting projectiles, flowers begin emitting hypnotic gas, roads get coated in oil.. but it continues to escalate as the AST fights on. Missiles disguised as radishes, dolls taze people walking by… and eventually, a giant bomb.

In the end, they get to the hot springs, only for them to freeze over as Yoshinon’s head falls off, causing Yoshino to freeze everything around her.

I’ll just admit I didn’t remember anything from this episode. While I have indeed forgotten quite a bit from my first watch of Date A Live, I think it’s fair that I completely forgotten this episode, considering the lack of story development. Just a fun little sidetrack to the overall plot.

I love how Ratatoskr somehow just happens to own so many food stands in the city. I guess it’s their specialty or something. Anyways, it was a lot of fun watching a bunch of food stands battle the AST. Not only did a large portion of the city get destroyed in the battle, but a lot of food stands died that day. Rest in peace, food stands. 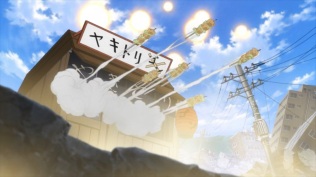 Early on in the episode, Ratatoskr’s vice-captain gets sent to dig holes as a punishment for encouraging Kotori to go to the hot springs so that he could surveil her. We see him a few times afterwards, digging a hole, with pixel / Mario inspired graphics. And in the end, he manages to dig up a hot spring! The main reason I liked this little part of the episode is because of the Mario-esque graphics used.

This was just a small moment, but I found it funny how Yoshino panics and covers Yoshinon’s mouth because of something that she herself says through the puppet. Yoshino is just too cute.

It was a fun episode, but I’m ready to get back to the story. I want more spirits, more interesting developments, and most of all… more dating! I just love those “dating sim” moments when Ratatoskr holds votes on ridiculous things for Shido to say, despite the seriousness of the situations he is often in.

Other Date A Live Posts