We’ve made it to the second season of Haruhi for a single episode.
After this, it’s back to the first season.
Which means we have to enjoy the crisp quality that the two years difference made between the seasons…

It’s Tanabata, that day where the Japanese write wishes on a piece of paper, called a tanzaku, and hang it on bamboo. Until now, I didn’t know the name for this day / tradition, but I do now. Naturally, Haruhi is excited for Tanabata, because of the possibility to communicate with the gods and whatever that could lead to. Haruhi steals a small bamboo tree from behind the school and brings it to the clubroom, and has the club write out their wishes. Afterwards, Haruhi gets very somber and quiet.

Asahina gives a note to Kyon telling him to stay behind in the clubroom. Once everyone else has left, Asahina asks Kyon to go back three years in time with her. Unable to refuse Asahina’s puppy eyes, he accepts. Kyon closes his eyes, and when he opens them, he is in the park with Asahina, three years in the past. Asahina falls asleep and her adult counterpart shows up, telling Kyon to carry Asahina to the nearby school gates.

Kyon walks over there and discovers a young Haruhi sneaking into the school grounds. He follows her in and helps Haruhi write out a message on the grounds in white chalk. Haruhi asks Kyon about aliens and whatnot, and his answers lead her to become interested in North High, their present day school. Haruhi leaves, and Kyon wakes up Asahina who discovers she lost the device she needs to send them back to the present.

They go to see past Yuki, and after some explanation, Yuki uploads her future self into the past. Yuki then has Asahina and Kyon sleep in her apartment – when they wake up, it’s present day. Yuki had stopped time in that room for three full years, meaning that Asahina and Kyon were laying there in that room for three years in order to make it back to present day. Crazy.

I’ll be completely honest here, this episode felt brand new to me. Even things I probably should have remembered, like why they went back in time, or how they got back, I forgot. Even after meeting with past Yuki I didn’t remember that they were in that room for three years. Which basically means, this episode managed to blow my mind for a second time, probably. Just when I had thought I’d seen enough time travel content to not get surprised by something like this too. An excellent episode.

Who would have thought that the symbols we heard about in episode 2 were not drawn by Haruhi, but Kyon? 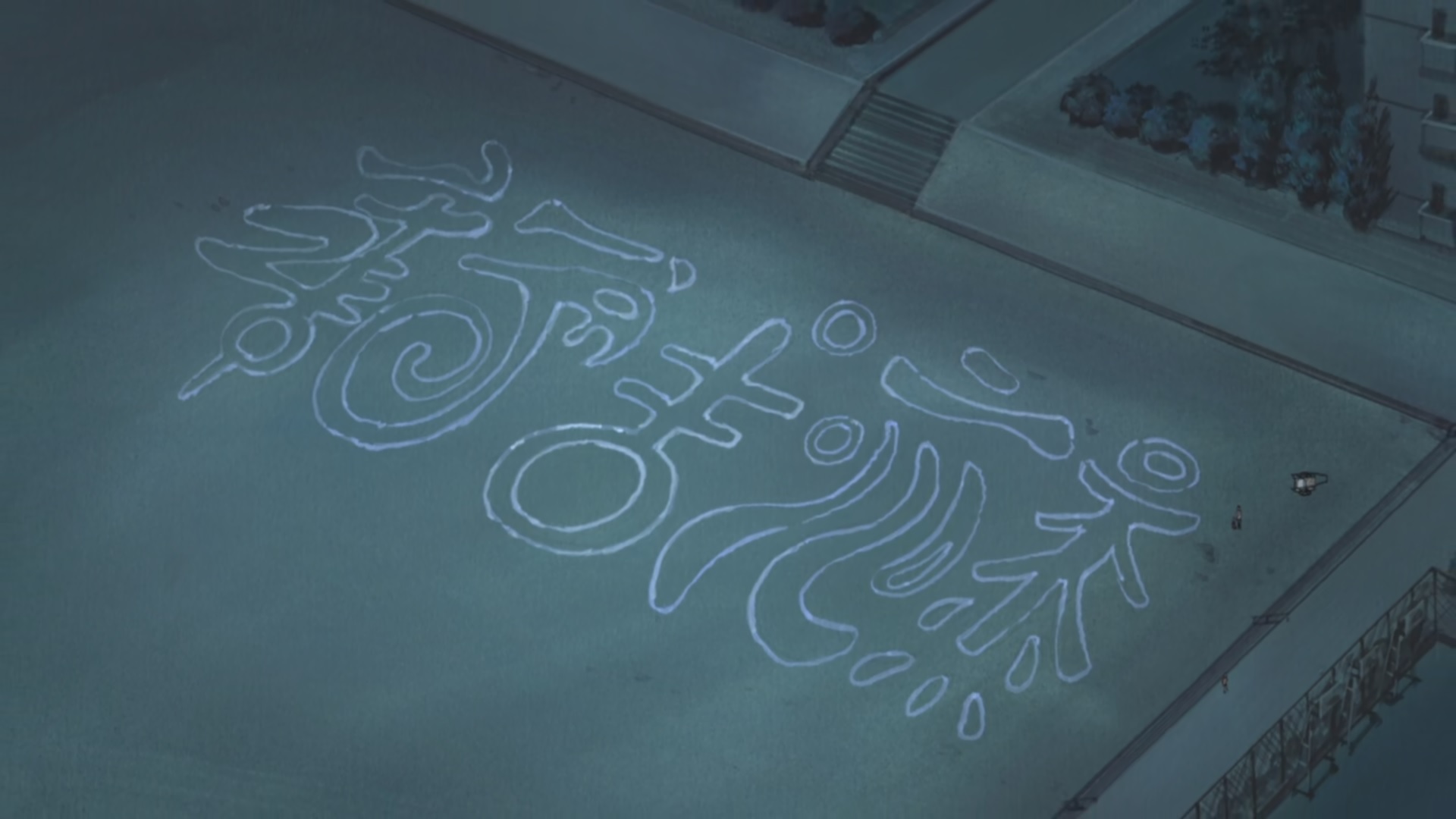 I won’t go into much detail because I’ve already mentioned that the time travel and how Kyon / Asahina got back to the present day really impressed me. This episode is just packed full of good moments, and the time travel parts are especially great. Haruhi really makes you think, with the way it manages to go outside of the box.

From the Tanabata portion of the episode, I’d say my favourite part was when Haruhi describes the two stars the gods are from that the wishes go to, and that according to the theory of relativity, they are 16 and 25 lightyears away from earth. She concludes that the wishes will take 16 and 25 years to get to them. Kyon asks her if it would then take 32 and 50 years for the wishes to be granted, because they’d have take as long to return.

Haruhi dismisses Kyon with: “The gods will think of something“, which I thought was funny.

I’m now beginning to wonder if there are any other crazy episodes like this one that I’ve forgotten. Aside from the endless eight, I don’t really remember much else at all. Maybe chronological order has something to do with it? I don’t know though.

I will say that I’m liking chronological order so far. After the last episode (relaxed baseball), I wasn’t sure if we would get more random episodes or if we would get some plot related episodes. That said, I don’t really know if this episode has much of an effect on the overall plot. Now that I mention it, I don’t even know what the overall plot is at this point! Either way, it was a hard hitting episode, as opposed to a relaxed one.

I’m fine with either, but it a balance of both is best I think.