Been a few weeks, but we’re back with some more Circlet Princess!

The episode opens up to Nina losing a circlet bout to… a girl on a snowboard. We then find out that Nina is a gamer, who likes playing battle royale games. Because she is a backup fighter in the club, apparently no one ever bothered to figure out what weapon Nina should use. I wonder if she ever even practiced?

Well, because she’s a gamer, naturally she wants to use a rifle for circlet bout, but the girls say she can’t because it’s too expensive. This causes Nina to get depressed. The next day, the circlet bout club cleans the school’s pool. And what do you know, cleaning the pool ONCE was enough to afford the supposedly expensive rifle!

Yuuki got sick cleaning the pool, so Nina has to step up and fight in the next circlet bout match against a school I’m going to call Red Academy, because they love the colour red. We find out that the reason they like the colour red is because they can “hide” their blue weapons due to the lighting / contrast in the arena… or something like this. And their weapons? Pom poms, of all things…!

The rifle was so expensive that Nina can only afford two shots (isn’t this a virtual sport? they try to explain why it would cost money to fire shots but it’s still pretty dumb..), but she manages to pull through and Union Academy wins the circlet bout match against Red Academy. 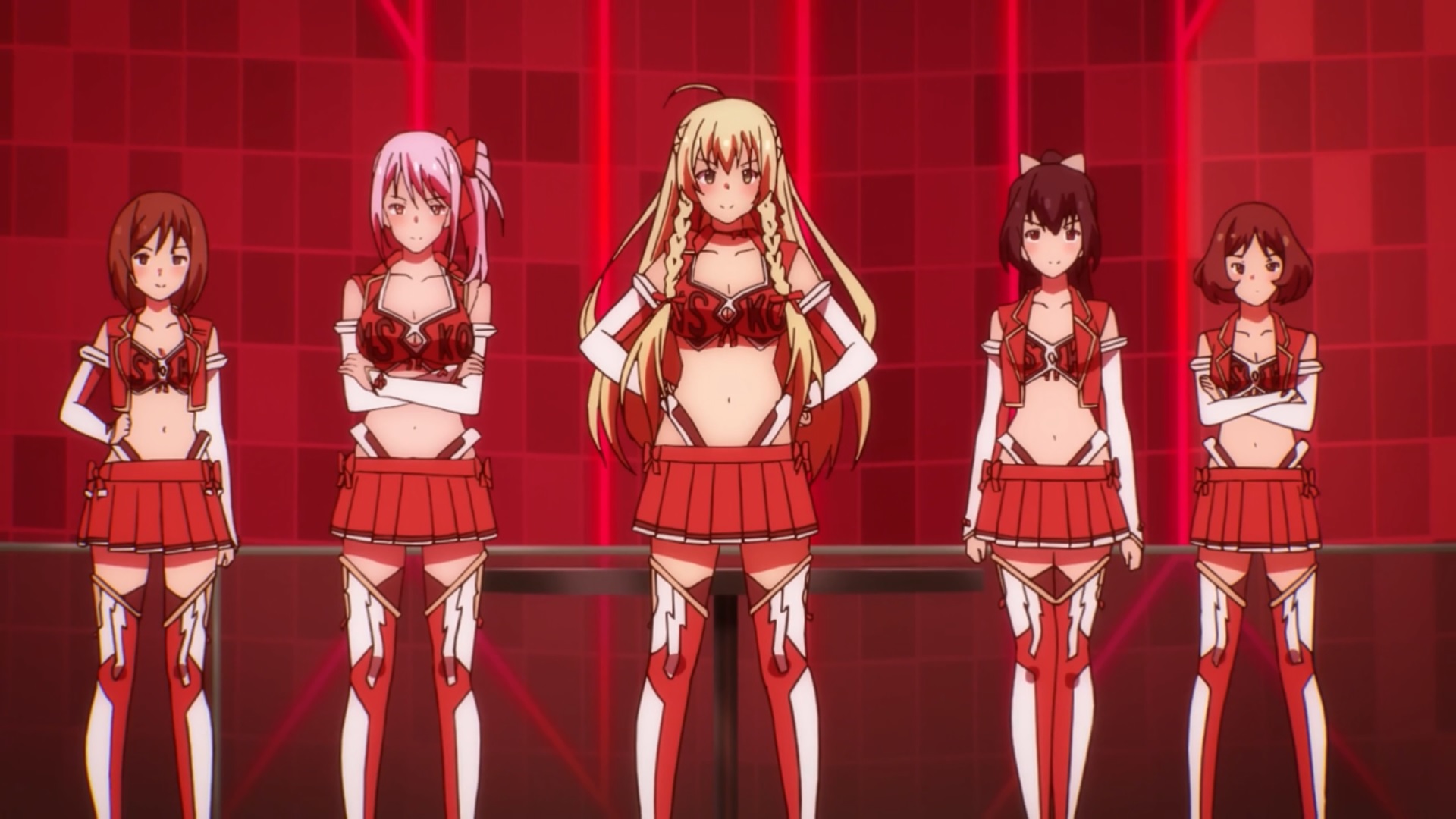 It’s about time we actually saw Nina do anything. It was weird that she joined the team, and then we never really saw anything of her for 3 or 4 episodes.

I think it’s funny how anime still uses that trope where being good at first person shooter games will somehow translate into being good at ranged combat in real life. It seems so easy at a glance, until you realize that running around is actually very tiring in real life, and that trying to aim / react can be difficult in the moment.

Luckily Nina used a strategy to make sure she didn’t have these issues – she stood still and just waited for her opponent to get close enough that she couldn’t miss. And what do you know, it worked. It made for a pretty bland fight though. Maybe if Nina could have more than two shots the fight would have been more exciting. 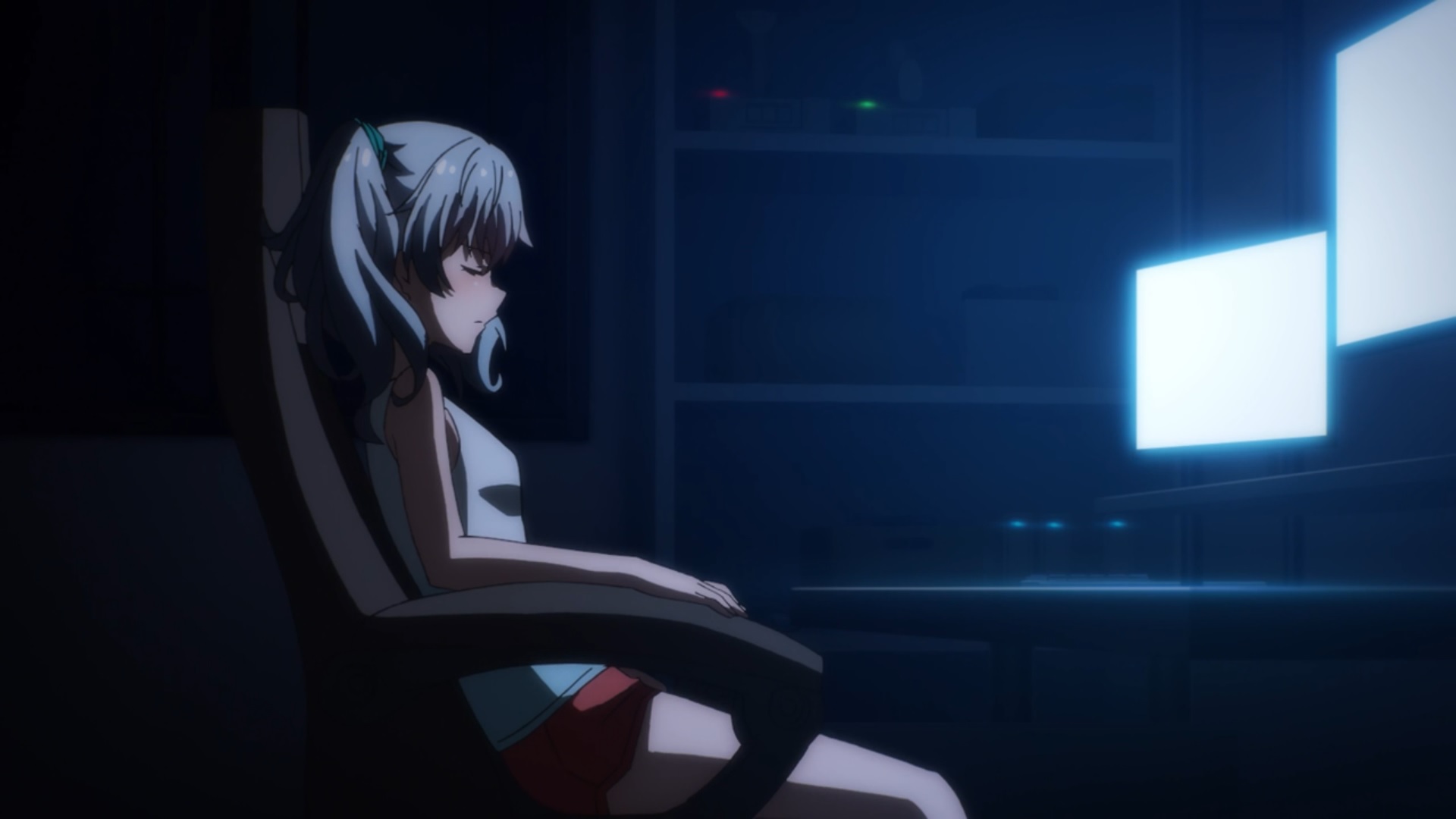 First off, a snowboard as a weapon?! What is this anime coming to? Literally only once have we seen a circlet bout take place in a snowy arena. And isn’t it virtual snow? Does the snowboard girl just automatically lose if the arena isn’t snowy? Seems a bit unfair that one girl has to fight on potentially slippery snow while the other has a weapon that only works on snow. It all just doesn’t make sense. It’s so stupid it’s funny though.

Secondly, pom poms as a weapon? And they’re designed so that the opponent has trouble seeing them because of the lighting? What kind of sport is this? Are there no rules against designing the arena for advantages? I mean, if I had an “invisible weapon”, I wouldn’t have chosen pom poms! A spear or long sword would make more sense! But again, it just seems so stupid that this school relies on a specific arena in order to win, just like the snowboard girl.

The early days of a sport are like the wild west it seems. Especially if schools can just use whatever arenas they want, even if the arenas allow them to “cheat”. If this episode has taught me anything, it’s that circlet bout as a sport is a total joke. A funny one though.

To be honest, while nothing makes sense, I actually enjoyed this episode. I think when an anime like Circlet Princess can’t really compete with other one-on-one battle anime due to budget or other factors, it makes sense to up the crazy factor. The anime isn’t going to win any awards for animation, and the story itself is too straightforward to be special – so may as well just make circlet bout as ridiculous and over the top as possible.

It was a funny episode that left me scratching my head many times.
While I doubt they will get crazy like this again, I hope they do!