Futaba is a second-year and good friend of Sakuta. She can be best identified by her labcoat and glasses, and will usually be found in the school’s science room, as Futaba is the science club’s only member. Futaba appears throughout the entire anime, primarily as a support character to Sakuta who provides advice from a scientific angle to puberty syndrome occurrences. Futaba takes on a main character role for episodes 7 & 8 in the anime. 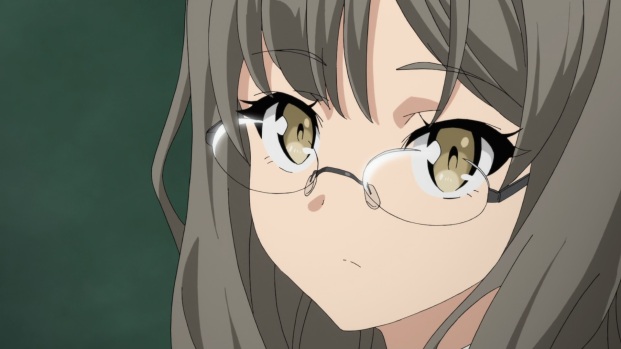 Futaba is a very interesting character. She is very smart and calculating, able to theorize the scientific causes to most occurances, or at least make an attempt. She is also fairly self-aware, and questioning, which makes her quite different from Koga. It’s interesting to see how much different Futaba reacts to her situation. But it quickly becomes clear that intelligence isn’t everything..

Not So Hidden Feelings

While Futaba appears as early as episode 1, and consistently appears in episodes after that, the first moment I’ll bring up with Futaba is actually from episode 4.

Sakuta is chatting with Futaba about his whole situation with Koga, when he notices that Futaba seems a little off.

“I was on the same train as Kunimi this morning… I’m just disgusted at myself for being happy when a guy with a girlfriend talked to me.” – Futaba

After cracking a quick joke at Sakuta, telling him that he makes her skin crawl, Futaba continues on that note.

“I get the feeling that I’m getting worse and worse.” – Futaba

Perhaps some foreshadowing of what is to come?
Remember that this is all from episode 4, before Futaba’s arc.

Sakuta tells Futaba to just confess to Kunimi and get it off her chest, because holding her feelings in will only make things worse. While agreeing that this would be the sensible thing to do, ultimately Futaba is convicted to not do anything about it. The conversation then turns back to Koga afterwards.

This scene is the first real sign we have of Futaba’s feelings for Kunimi, which play a role in what is to come of Futaba.

There is a scene in episode 5 where Kunimi visits the science room’s window, asking Futaba where Sakuta is (Kunimi was looking for him in order to tell him about the rumours going around between him and Koga.). Sakuta opens the door to the room, notices Futaba and Kunimi, and proceeds to shut the door to give them alone time – likely as a joke, but you never know with Sakuta. He did want Futaba to just confess and get it over with, after all. 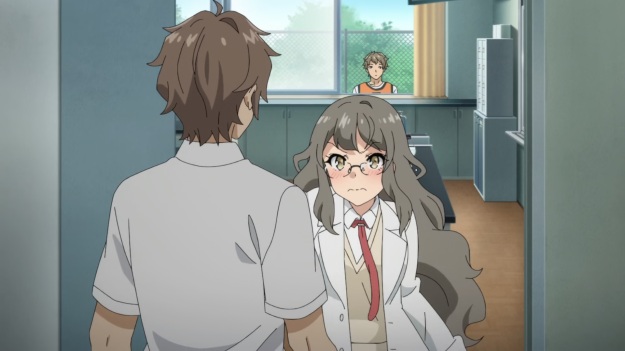 Futaba’s reaction in that moment is golden. In an emotional outburst, Futaba runs to Sakuta and chews him out for trying to give her and Kunimi alone time. She is intensely afraid of Kunimi finding out about her feelings for him. Futaba’s reaction, and her overall stance in regards to her feelings, are a telling part of her character.

August 8th, Shouko had been visiting the cat at Sakuta’s place throughout the summer. Sakuta finally decides that he should talk to Futaba about it, as he had met an older Makinohara Shouko in his past. Futaba also knew about Makinohara Shouko through Sakuta – she actually brings Shouko up in her first scene with Sakuta in episode 1.

When Sakuta calls, we can immediately we can see that something is up – Futaba’s phone is on camera function and pointed at her body. When Sakuta’s phone call comes through, she answers in an irritated tone and moves her foot in an irritated manner. We don’t get any of the conversation, as the OP begins, and right after, we see Sakuta meeting Futaba at the library.

What is apparent is that Futaba is quite different from how we’ve normally seen her prior to this moment. Her hair is up, she is wearing contacts, and she isn’t wearing a labcoat. She just looks much more stylish than normal, especially when you consider that Futaba was never one who seemed to care about appearances. For example, here is Futaba running errands from episode 5:

Just a plain t-shirt.
Clearly something has changed!

Continuing on with the meeting, there is a noticeable pattern in Futaba’s behaviour as Sakuta is questioning her regarding her appearance. As she speaks, she averts her gaze to the left, and eventually shifts her head to the left – just like Koga did whenever she was trying to hide something.

Sakuta brings up Shouko, and Futaba concludes that it’s probably just a coincidence.

“I hear everyone in the world has two doppelgangers.” – Futaba

She clutches the book in her hand as she says this, providing more body language hinting that something is wrong. Sakuta mentions that it’s just a myth, and Futaba agrees… while averting her gaze to the left once again.

What can be gained from this scene is that Futaba is hiding something, which we know is a fact thanks to what happens later on. She is also very dismissive about Sakuta’s concern regarding Shouko – but to be fair, she doesn’t really know much about the situation anyways. I don’t think Futaba would have been able to offer much advice on that matter regardless.

What we can learn from these various scenes of Futaba is that she is what you can call a “closed book”. She doesn’t confide in others when it comes to personal issues, instead resolving to cope by herself. You’ll notice that this is a reoccurring theme when it comes to Futaba.

That evening, Sakuta and Mai spot Futaba entering a net cafe, and they go to investigate. Sakuta calls Futaba’s phone, and then sees Futaba in the cafe – only she is not holding a phone. Sakuta catches her after she tries to run away.

“Were you talking to me on the phone?… Then I guess there’s no hiding it.” – Futaba

What gets me about this quote is that Futaba was still willing to try and hide what is going on from Sakuta, even after being caught. If Sakuta WASN’T on the phone with Futaba, would she have acted differently? That’s the thing with Futaba – unless Sakuta presses her or catches her in a lie, she continues to try and hide her issues.

We learn from Futaba that there are two Futaba Rios, as of August 5th (three days prior to August 8th). When asked if she knew why there were two Futabas, she responds saying she doesn’t know – but her body language once again gives her away, as she moves her foot in the same way the other Futaba did when answering her cellphone. Once again, Futaba is hiding something.

At Sakuta’s place, we get the first bathtub conversation between Futaba and Sakuta. Futaba admits that she is a bit scared in regards to her situation. She then explains how her puberty syndrome could be related to quantum teleportation.

The gist of it is that somehow a framework of Futaba as a person was sent to a separate location via quantum entanglement – meaning that there are two frameworks of Futaba in existence at the same time – one in location A, and one in location B. Now to exist, one needs to be observed. Even if both frameworks were observed, their memories and experiences should be synced, because they are tied together via quantum entanglement, even if they are in separate locations.

Or as I’m going to call them moving forward – new Futaba and old Futaba. Old Futaba being the one whose appearance never changed, and is staying with Sakuta. Of course I’ll still refer to just Futaba at times as well, when something applies to her overall character.

How could there be two different Futaba personas in existence at the same time?

Old Futaba claims she has no idea, as she averts her gaze away from Sakuta. We know this is a lie thanks to later events, so once again, old Futaba chooses to hide the truth from Sakuta, keeping it to herself.

Nothing very eventful happens here, except for this:

“It’s just been a while since the last time I wasn’t alone for breakfast.”
– Futaba

This just helps put things into perspective. Futaba is a very lonely person at home because her parents are not around. This lack of social fulfillment at home makes her more reliant on school and friends to fill this gap. Even if she doesn’t explicitly say or think that she needs to socialize with others, it’s something that deep down she really wants.

Which brings us to our next encounter. 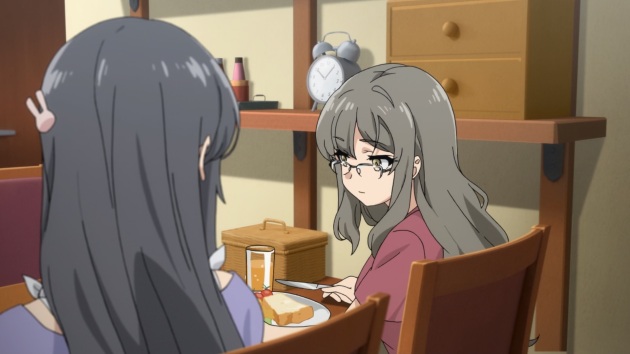 Sakuta meets new Futaba at school, who is spectating Kunimi’s basketball game. Afterwards, she tells Sakuta about when she first developed feelings for Kunimi, which was when he gave her a chocolate cornet at lunch time in their first year. She mentions that she was feeling down at the time, which was part of why she started to like Kunimi.

Sakuta also mentions that the other Futaba is at his place, and we find out that both new and old Futaba have an idea of what’s going on. New Futaba also eludes that old Futaba lied about the cause, but doesn’t divulge what exactly is happening.

One thing that I’ve noticed about the two Futabas is that new Futaba is more willing to talk to Sakuta. She’s opens up more than old Futaba, and even though she still holds back information at times, she often gives hints that get the ball rolling instead of telling outright lies or saying nothing. There is a reason why new Futaba is like this.

At the conclusion of the episode we are left with a new, important piece of information regarding Futaba…

The episode ends with the reveal that Futaba has been posting photos of her body online. Notice how her username is @ choco_cornet, relating back to her story regarding how she developed feelings for Kunimi. We can also see that she’s posted at least 72 images, judging by the selfie numbers on her page. Finally, we can also see the frequency of her posts, or at least the following posts:

So regardless of what new Futaba was to say about this, we know for a fact that she has been updating her twitter regularly with suggestive / lewd selfies.

Just like the anime ended the first Futaba arc episode with this cliffhanger, I’ll do the same as the analysis is too long for a single post. Futaba’s issues take a little longer to come to light, and so while we have some of the pieces, we still lack the big picture of what is going on with her, but soon everything will be revealed and fall into place – so stay tuned for part 2!