With the prologue out of the way, I was able to get into the action with chapter 1.
Which is great, because the prologue didn’t have an investigation / class trial.

Chapter 1 was a lot of fun, and brought a lot of nostalgia back seeing as its been many years since I have played a Danganronpa game. The soundtrack and class trial both were really enjoyable.

I’m sort of on the fence as to how much I really like the investigation phase. You basically just go around and examine everything, gathering truth bullets. I don’t think it’s possible to miss anything, because the class trial won’t trigger until everything has been examined – which I think is a bit of a shame. It’d be neat to be able to miss evidence, putting you at a disadvantage in the class trial.

Maybe something like, if you’re missing a truth bullet that you need in the class trial, you take some creditibility / influence damage and someone says something like “Did you miss X?”, and then you gain the truth bullet at that point so that you can move forward. I guess just a way for the game to say that you didn’t do a good enough job at investigating. I think that’d be neat at least.

That said, the one enjoyable part of the investigation phase is being able to come up with your own idea of what happened prior to the class trial. 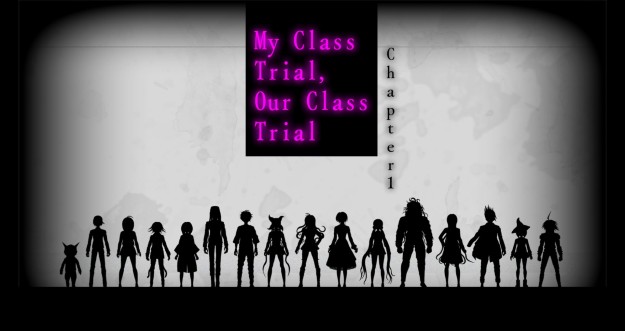 Prior To The Murder

The game dropped a lot of hints prior to the actual murder. Hints that didn’t exactly expose anything right away, but moments after the murder I picked up on them right away.

A brief synopsis of what happened is this:

The group agreed that no one would kill anyone, which would lead to nothing really happening. Naturally, Monokuma didn’t like this, and so he offered a “first blood perk”, where the first killer would be able to leave for free with no class trial. From the moment he offered this perk, I didn’t think he would honour it. I still don’t think that he would have honoured it, even after knowing what happened.

More importantly, Monokuma mentioned that everyone would be killed if no one decided to step up and be the first blackened murderer. I think this was the next day? I can’t quite remember.

With a time limit set, people became a little more anxious as to what was happening. Shuichi had discovered a secret door in the library, behind a bookcase. He suspected that one of the 16 students was actually controlling Monokuma & friends – a mastermind (a theme we’ve seen before in Danganronpa). So Kaede and Shuichi spend a good amount of time investigating the library and coming up with a plan.

The plan was to set up cameras with motion sensors in order to capture a photo of the potential mastermind, as well as a motion alarm to signal when the secret door was being accessed. It was believed that the mastermind would have to use the secret door in order to initiate the process that would kill all of the students after the time limit was up. So they wanted to try and catch him/her before they could do just that.

When the time came, the alarm went off, Kaede & Shuichi ran down (they were waiting in a classroom upstairs that had a clear view of the stairs, and the classroom also had a ventilation shaft that led to the library so they wanted to keep an eye on that) and found the corpse of Rantaro Amami, the ultimate ???. Naturally, there was a body discovery announcement, and after some confusion, the investigation began.

Here is where I had a fairly good idea of what had happened.

So Rantaro was killed by a shot put ball to the head, right by one of the cameras (that was set by Kaede). Right away I knew that Kaede was suspect for several reasons:

So this is how I figured the murder went down.

Kaede took a shot put from the storage room while Shuichi was getting the cameras. She kept it in her backpack. She then put it on top of the bookshelf in a way that it could roll off and onto someone’s head, all while organizing all of the books on top of the shelves to “block the vent”. She made sure to carefully affix the camera with a lot of tape, and turned the flash on.

That way, when the “mastermind” went to open the secret door, the flash would go off, and they would walk towards the camera. If they tried to fiddle with or take the camera off of the shelf, the movement would shake the shelf enough to cause the shot put to roll off of the shelf and onto their head. As you can see, I sort of focused on that “a lot of tape” aspect more than I needed to.

But I was basically 90% of the way there.

The only part of the murder that I didn’t really pick up on was that Kaede could roll the shot put down through the vent, onto a channel of books, and then off of the bookshelf and onto their head. Close enough though right? I didn’t think about the vent much because my solution didn’t require it.

There was all this information and whatnot about the AV room across the hall, and ideas that someone could have thrown the shot put… but I knew that the shot put fell from on top of the bookshelf. 100%. I also knew it was Kaede, because she placed the camera and because of that weird interaction where you had to click on the shot puts to advance (I found it odd because I had already examined the shot puts prior to that moment).

Honestly, that shot put interaction was just odd enough that I remembered it right away when I saw that the murder weapon was… a shot put.

The best part of the game! The class trial.

I didn’t realize how much I had missed that old spinning room!
And it looks like there is a new feature, perjury, aka lying!

Hearing that there are going to be different paths that a trial can take via perjury has me very excited. You can bet I’m going to scrutinize every single “Non Stop Debate” segment of class trials to try and find a way to commit perjury. It’s an interesting one, because there are many things that you simply can’t lie about – facts are facts. So perjury is really going to only come into play through things like an alibi, or a witness account of something. Very cool.

So far I guess there isn’t that feature where you can take someone’s statement and store it as a new temporary truth bullet.. I forget if this feature had a name, I believe it’s from the 2nd Danganronpa game. I liked that feature as well, and maybe it will still make an appearance in a future class trial, just like I’m sure there are many more minigames to be revealed in future trials.

Other than that there are some new minigames, like the Debate Scrum, where the room is divided into two teams arguing and you have to match the argument to the answer. Not a bad game, but I feel like it will be short lived because with 2 people dying per chapter the team sizes will end up being pretty small later on.

Anyways, let’s talk about the chapter 1 trial itself.

I got to experience going through all the motions, step by step. Even though I had a good idea as to what happened, none of the characters did. I’m okay with that though, because I love the Non Stop Debate sections of class trials, even if it’s things I already know. Naturally these sections will be even more fun with the potential to commit perjury.

The trial proceeded as expected, until we got to the one part I had wrong which was in regards to how the shot put was used. At that point though, most of the evidence had been used for something, so I knew that the stacked books would be brought up eventually. It was a very straightforward class trial, I never really got stuck anywhere, although there was the occasional mess up in Non Stop Debates.

That’s one thing that generally happens, at least for me. Sometimes the wording of arguments has me thinking A, but the game is really looking for B. Or my train of thought just isn’t in sync with the game for a specific Non Stop Debate, so I find myself having to watch the debate many times, or guess, to figure it out. Patience goes a long way in Non Stop Debates, considering the timer is more than generous.

I also didn’t have any skills equipped for the first trial, because I wasn’t sure what skills I’d even want.

It was fun and exactly what I was expecting.

Kaede’s death was pretty brutal, although you’d think that the way she was bouncing up and down on the piano’s keys would have broken her neck and killed her sooner. The keys must not have been weighted or something I guess. Either way, the image of a hanged corpse is pretty disturbing on its own. RIP Kaede.

Rantaro was the first to die. I don’t think it’s a trick either, he’s probably gone for good. I have a feeling that his existence and death was meant to poke fun at the player, hinting at Hajime Hinata from Danganronpa 2, who was also an Ultimate ???. I did think it was odd that the game would try and use that one again.

Oh, and Monodam killed his blue brother. I forget what they are actually called. It was intentional too. I have a feeling Monodam is a good guy. It’s something that we’ve seen in the past games – a good character / entity trying to silently help out. If Monodam ends up killing another one of his brothers, I’ll be pretty convinced that he is a good guy. Either way I like him.

That’s all I have to say for Chapter 1, which ended up being quite a bit.
It’s a fun game so far, looking forward to continuing on and seeing how creative the game gets with future murders.