Black Cat is an anime that I had never heard of until I was looking for something to check out for the A to Z challenge. It was an all right anime!

Like most anime, it had many ups and downs throughout.

So, let’s take a look at Black Cat. What it did right, what it didn’t. I feel like I have a pretty good idea of what I enjoyed and what went wrong for this anime.

The review contains no spoilers pertaining to the plot.

Black Cat is one of those anime that I believe had the potential to be a great anime.
It just fell short in some areas.

First I want to talk about the plot, because I think the plot itself wasn’t bad. It was just not paced well.

I enjoyed the overall ideas presented through the plot. Assassin turned sweeper (non-lethal bounty hunter), powerful organizations, and an interesting world. The anime had some good ideas to work with and develop. And at times it did a great job. There were many episodes where I really enjoyed the pacing.

I guess you could call it a formula that many anime use – episodic plot that is introduced and concluded in one episode while the overarching plot slowly builds up in the background. Once there has been enough build-up, the anime shifts to a high-action climactic confrontation between the protagonist(s), and the antagonist(s).

The problem is that this pacing was inconsistent throughout the anime. Black Cat did a great job with the “build-up” episodes. Train and friends would be trying to capture a bounty or something like this, and the anime would introduce developments with the antagonists / villains in the background. So that part was all well done.

But then the confrontations were way off. After 4+ episodes of buildup the anime would deliver what felt like a super rushed confrontation. There were enemies that were hyped up and I was looking forward to seeing them in battle – but then they would be defeated in a very short period of time, sometimes in a few minutes or less. Overall confrontations that SHOULD last at least 4+ episodes would conclude in 3 or less.

I’m not looking for a One Piece style confrontation, that last 30+ episodes and individual fights last 4+ episodes. I would just like to see a fight last longer than half an episode. I don’t recall a single fight taking longer than half an episode – most felt like they lasted around 5 minutes or less. Even the most hyped up villain(s) didn’t have long fight sequences.

So that’s my biggest issue with the plot – the pacing. The anime used a slower pace as it built up the enemies and their capabilities, which was done well, but then just went into overdrive rushing through the fights. Considering the point of this sort of formula is to gratify the viewer with great fight sequences after some buildup, Black Cat definitely fell short in this aspect.

The Ending Was Also Rushed

Black Cat got the rushed ending treatment. And it really didn’t need to!

There is another anime I want to briefly mention here.

Mekakucity Actors will go down in my memory as the best anime that had a super rushed ending. It had incredible potential. I was loving every second of it. But then the anime just put the pedal to the floor and started skipping swathes of time / events and began pushing the plot at a super fast pace. I still love the anime, despite this flaw – because I believe the anime is still praiseworthy. Anyways, what I’m trying to get at here is that Mekakucity Actors was rushed because it HAD to push the plot through and finish up in the 12 allotted episodes. The anime clearly needed more than 12 episodes to finish properly, but hey that’s just how it goes sometimes.

Black Cat is a little different from that, because Black Cat basically dug its own grave. The anime essentially rushed the conclusion of what I believed would be the final story arc, to try and rush ANOTHER story arc, with no time to properly do so. Who made this decision I don’t know, but it’s madness to expect something like this to work out. All it accomplished was leaving me with a sour impression as I finished the anime. Rushing a story arc, to cram another story arc / development at the last second. It’s something that I feel was unnecessary, and the story arc they rushed out in the end wasn’t that important really. The anime had a clear point where it could have ended beforehand, with no major questions looming.

First off, Train Heartnet is probably one of the worst names I think I’ve seen from anime. The name doesn’t flow well at all, and just sounds so weird for a name. It seems like they tried a little too hard to come up with something edgy here. Even just a single letter for a name, like “T.” would work better I think. I don’t know, I just think it’s an ugly name.

Anyways, I had some issues with Train, but also some aspects I enjoyed.

Train starts out as edgy as his name would have you believe. Quiet, composed and badass assassin. I really enjoyed Train as an assassin. His character was essentially designed for this role. Watching Train, aka the “Black Cat”, say his signature line “I’m here to bring you bad luck” was pretty cool. Edgy, but it worked well.

The anime is partly about Train’s character developing and changing from edgy assassin to friendly sweeper (non-lethal bounty hunter). I like the idea of this, because I think I would have gotten bored if the anime was 24 episodes of edgy Train.

But just like other aspects of the anime, this change felt so rushed! What I feel like should take 12 – 20 episodes took less than 8 episodes. So we go from this quiet, collected assassin to a free spirit character who only gets serious when he needs to in no time at all. The transformation was just too fast. I would have really enjoyed to watch it play out over a longer period of time.

Don’t remember Sven’s last name, but I liked Sven. His character was consistent, and awesome. He is the hero type, always trying to do good. But he has comedic moments throughout the anime. The way he defeats his enemies and captures bounties as a professional sweeper I thought was great. Just a well rounded character all in all.

The one issue I would bring up with Sven is that despite being a professional sweeper, who we know is very good at his job by watching him in action, Sven is stuck with the “always broke” trope for the entire anime. I don’t hate the “always broke” joke, but I think that it works best in specific situations, with specific characters. Sven’s character works for the joke, but to use the joke throughout the entire anime was a bit much, they should have dropped it at some point I think. 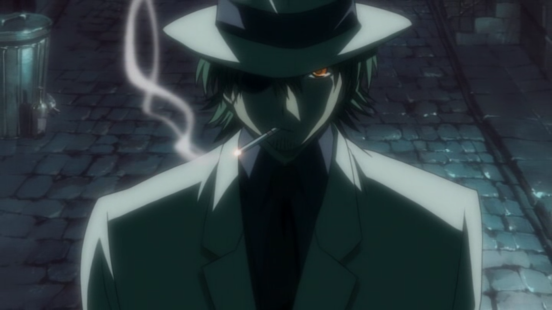 The Beginning Was The Best Part

I’ve already mentioned why the ending was disappointing, and that the pacing throughout the anime was off. I also mentioned that I think Train’s early character was well done and they dropped it too fast – the transformation needed more time.

These are big reasons as to why I enjoyed the first 8 or so episodes more than the rest of the entire anime.

The one other reason is because early on the anime has this excellent dynamic going on. The anime has these confrontations between Train and Sven – Train trying to assassinate a target, and Sven trying to capture that same target alive for a bounty. I loved these episodes where both characters were both trying to fulfill their mission and stop each other in the process. These episodes were so enjoyable that I originally thought I had stumbled upon a hidden gem of an anime, hoping the entire anime would be like this.

Unfortunately that wasn’t the case, and Black Cat is one of those anime that starts out strong and then it’s all downhill from there.

The best way for me to describe Black Cat would be that the anime was a downward sloping curve. Started out well above average, and finished below average. Put it all together and you end up with an average anime. I didn’t dislike Black Cat, but my enjoyment from the beginning was all gone by the time I finished the anime.

So for that reason, I’d say that Black Cat is a slightly below average anime, average being a 7/10 rating.

I wouldn’t recommend watching Black Cat, but at the same time, it isn’t the worst anime to watch. So check it out if you are looking to watch a pretty average anime.

That wraps up Anime B of the Anime A to Z challenge!