I’ve never been wrong with an anime prediction. You could say that I am an expert at the art of predicting how an anime is going to play out. But I’ve spoken at length about my abilities in another post. So I’ll just cut to the chase here.

I have just finished episode 3 of The Kubikiri Cycle and I can already tell you who the murderer is. I don’t really have anything else I want to write about in regards to the anime, so let’s just jump right into who the mastermind was.

Mild spoiler warning… does it count as spoilers if I bring up details from the second / third episode? Also technically “I could be wrong with my prediction”, although I’m sure we all know by now that I’ll be right. They don’t call me Yomu the Prognosticator for nothing!

Before the big reveal, I will mention that it’s cute how the anime tries to throw the viewer off with this crime. The biggest example of this being the “locked room”.

For those who haven’t watched The Kubikiri Cycle, a character is beheaded in her room at night. Naturally we don’t know who did it. But the anime gives us a lot of information to work with. First, we get alibis from all of the characters on the island. I believe there are 13? in total, so 12 after the murder. Then we get a look at the scene of the crime.

So that night, the victim was painting in her room, working on a portrait of the protagonist of the anime. There was an earthquake, and another character phoned her to make sure she was all right. On the phone she said that she was unhurt, and that some paint had spilled but she asked not to be disturbed.

When we see the scene of the crime after the murder, there is a sea of paint on the floor between the headless corpse and the door (which is the only way in / out of the room as it’s too high for someone to enter through the window). 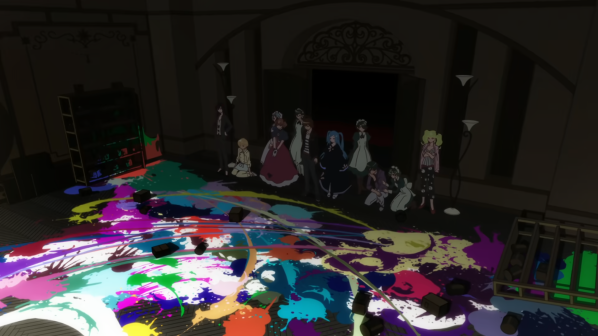 And this is where the “locked room” comes in, the little detail that the anime uses to try and throw us off of what really matters. Various characters say that it must be a “locked room” scenario, because there was no way to cross the sea of paint on the floor without leaving footprints (and there were no footprints). And so the anime tries to include the possibility that the murder took place before the earthquake, which they assume is what created the sea of paint.

But this is clearly not right. What’s to stop someone from pouring paint on the floor after murdering the artist? Even if they left footprints in the paint at first, I’m sure throwing another can or two on top would completely erase them, making it look like no one had walked through the paint to begin with. Or maybe the murderer had a path to navigate through the paint, and then poured more paint on the ground afterwards. Either way, it’s not a “locked room” scenario at all.

I love that the anime created this situation though. It shows me that it’s trying to make the mystery difficult, with irrelevant information or incorrect assumptions. It’s more fun this way.

And so this brings me to the prediction: who killed the artist girl?

Why?  Here are my reasons behind this prediction:

1. He has no alibi after the earthquake

We also know that this isn’t a “locked room” scenario. The killer easily could have poured paint on the ground after committing the murder to cover their tracks.

2. We know that he is envious of those around him

Thanks to the fortune telling genius girl, we know that the protagonist is envious of geniuses. While the fortune girl only says he is envious of Kunagisa, I believe it’s reasonable to extend this to all of the geniuses around him. It’s not a super strong motive, but it is a possible motive.

I believe the protagonist himself also said that he felt like he was the only one who didn’t belong on the island.

Again, put these two together and you have an individual who felt disconnected from everyone else, and was envious of them. If the protagonist is actually a psychopath and just putting on an act around everyone else (and us, the viewer), then feeling disconnected / envy is justification enough for him to commit murder.

This might seem odd at first, but the protagonist’s portrait is another reason that tipped me off. It’s not a regular portrait. It’s very off-putting. The entire portrait is coloured in shades of dark red, and the portrait is just downright ominous.

And these three reasons are why I believe the protagonist is the killer. There is one girl who has no alibi at all, but I don’t suspect her. The anime didn’t drop as many hints or messages for her than it did with the protagonist. It wouldn’t be satisfying if a character that we knew next to nothing about committed the murder. Meanwhile, the entire first three episodes are profiling the protagonist, telling us his thoughts and feelings, in addition to the points I mentioned above.

It may not explicitly tell us that the protagonist is psychopathic, but it gives us many signs that it is a possibility.

From a perspective of “who did the anime spend the most time on?” the protagonist has to be the killer. The anime just hasn’t put enough effort into any other characters to lead me to believe that they could have done it. I am only three episodes in, so the anime could develop other characters at some point, but I’m feeling pretty confident about this one.

And that’s all I wanted to write in this post.

Grancrest Senki final thoughts coming soon, just wanted to post this one now before I advance past episode 3 with The Kubikiri Cycle.

Until next time.
Thanks for reading.