Recently I stumbled upon a fun and cheap anime strategy game on Steam. I’m a big fan of strategy games – both the Total War franchise and Paradox grand strategy games are some of my absolute favourites. Knowing this, Steam recommended a highly rated strategy game to me that just happens to be anime inspired: Lost Technology. Also the game was on sale, 20% off; which is pretty crazy because the game is normally $5.69 (Cdn). So I really only saved a dollar thanks to the sale!

And it’s turned out to be a really fun game! For basically 5 bucks!

I bought it last week and I’ve managed to sink 10 hours in. Might not seem like much but it’s the only game I’ve really touched since moving back to Ontario in early June.

The game takes place in a fantasy world that consists of many different factions and races. It’s sort of your typical shared fantasy universe stuff: humans, dwarves, elves, demons etc. My type of setting for sure. 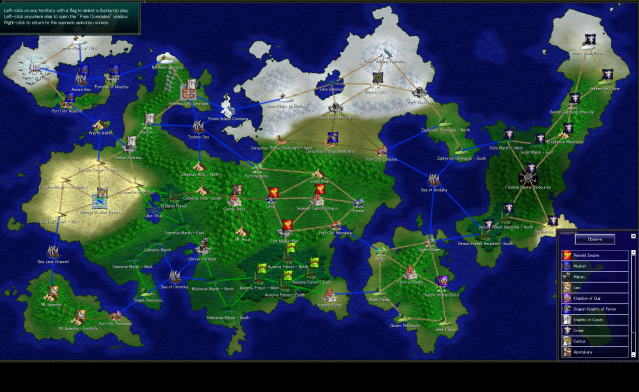 The overall gameplay is as follows:

It reminds me a lot of Total War games, with a turn based strategy overworld and real time strategy battles.

But unlike Total War games, Lost Technology has that anime inspiration. Which means there are a ton of cool anime hero characters! And the story mode has these cool visual novel cut scenes that advance the story as you play.

For the story mode, you choose a faction and I believe you have to conquer all of the continents of the map, except for the demon continent. This is just the prologue story, and more stories unlock as you go. It’s pretty robust, because every individual faction has a prologue story, and I’m assuming more stories that unlock after. I bet the demon faction becomes more involved in a future story. As you play and defeat factions / take certain locations you get little story VN-esque cut scenes to watch. 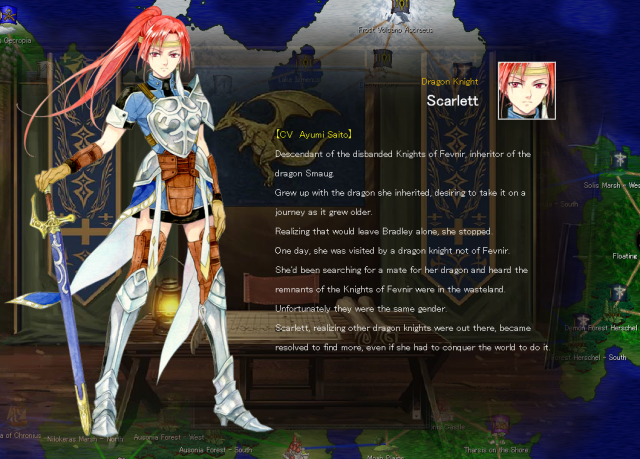 The first faction I tried out was the Dragon Knights of Fevnir. Led by the dragon knight Scarlett – her goal is basically to conquer the world in order to gather dragons to protect and breed them, as they are going extinct. Seems reasonable enough to me. She is pretty ruthless in her goals and has no mercy for others, putting dragons and her goal to preserve them above any damage / destruction she may cause. 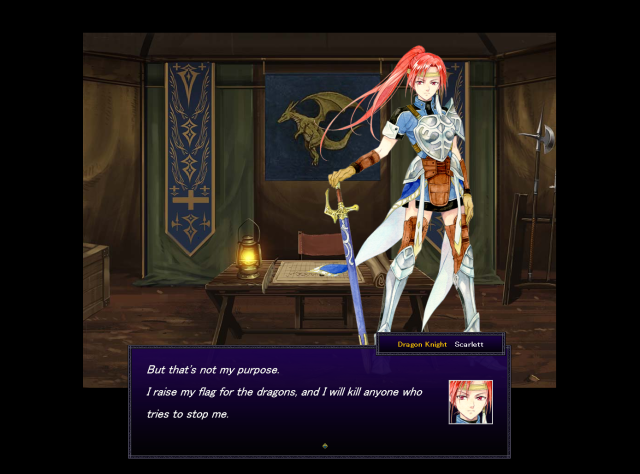 As you can see, they don’t use different character art for the little cut scenes. Which is fair, because it’s a strategy game first and foremost. 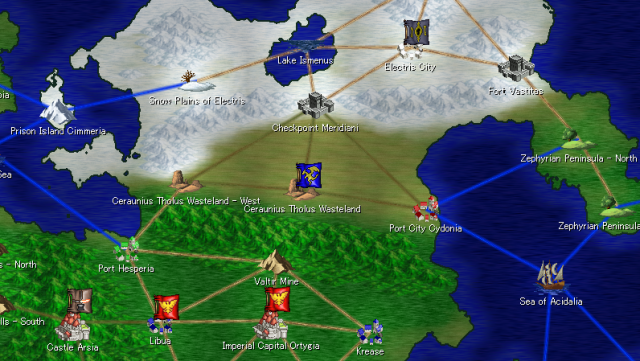 My starting location was the Ceranius Tholus Wasteland. The game makes you attack Port City Cydonia to the East in order to secure some good income. After that, I attacked the Checkpoint Marideni to the North – the checkpoint is designed to defend attacks from the North but not the South. This game can get difficult when you have to worry about being attacked from multiple sides of your territory, and the checkpoint allowed me to not worry about the Alcatraz faction (basically a bunch of thieves who were exiled from the Empire, they are pretty cool; I’ll for sure play them at some point) in the snowy North.

Here was one of my battles defending the checkpoint from the Alcatraz faction. That shady cigar guy on the right is their leader. It’s hard to see the numbers in the top left but they basically had twice as many units as I did. Depsite that, the defenses on the wall and the chokepoint allowed me to win every time they attacked here.

The next turn the frog faction, Kingdom of Gug, attacked my port city. But those frogs were no match for my knights, and the port itself has some pretty nice defenses for sea-based attacks.

Despite this, I ended up losing because the frogs and Alcatraz wouldn’t leave me alone and I couldn’t hold them both off forever. The game can be pretty difficult; and even though it’s a “story” mode, the enemy AI doesn’t do the same thing every game so there is a little luck in which direction factions decide to conquer. If you get lucky they might leave you alone for longer and let you take more territory until you are a threat to them.

There are two other game modes too.

First is a Random Scenario game mode, where you choose any hero you want, and start at a random location on the map along with the enemy AI. You get random hero units in your faction as well. Or you can choose to play as a wanderer, and factions can hire your hero to fight for them (you only control your hero and their squad in battles). It’s pretty neat but I haven’t played around with this mode too much yet.

Second is a dungeon exploration mode. This one is cool because it takes the strategy game part of Lost Technology and adds some RPG elements. You choose any hero you want, and have to clear floors in a dungeon. Everytime you clear a floor you get a random hero that can join your squad, up to a maximum of 8 I believe. Your units also level up and enemies can drop items that will give your units abilities or stats. So once you’ve unlocked enough heroes (and you can repeat floors for this) you can custom tailor your dungeon exploration squad to your liking. 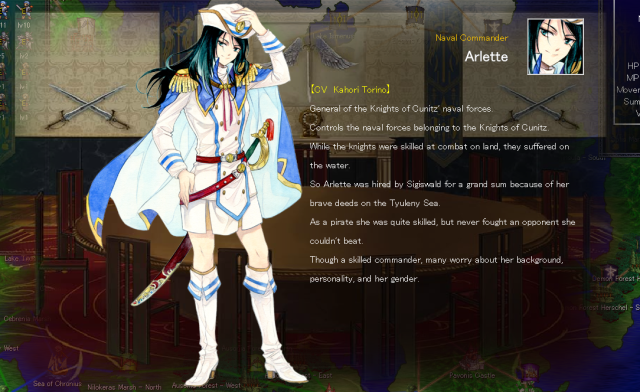 I played a bit of the dungeon mode and it’s a lot of fun. I chose Arlette as my hero and she has this one-time use ability (per floor) that summons a tidal wave on nearby enemies. She also just looks badass, which is the main reason I chose her. I got pretty far in the dungeon and had a full squad of cool heroes. There was even a floor with a boss enemy. Unfortunately the power very briefly went out in the house and I lost my save data. Still it’s a lot of fun and I’ll definitely play more of this mode!

I wanted to finish this post by showing some of the cool characters in the game. This is an anime blog after all! I’ll never hesitate to mention I’m a sucker for fantasy anime, and these characters are pretty top notch and look awesome. I’d definitely be interested in an anime that involved any of these characters, including the two I posted above (Scarlett & Arlette). 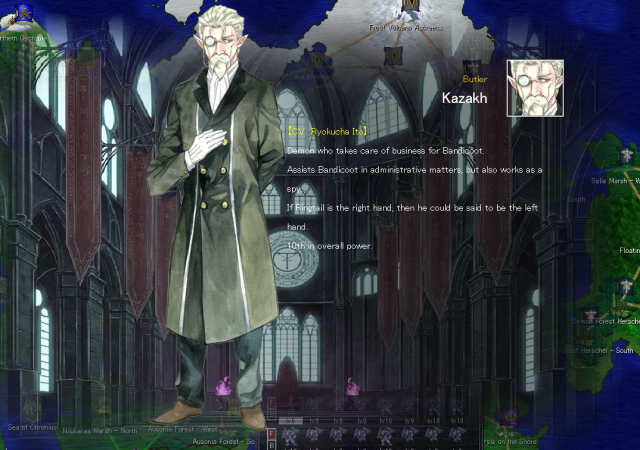 The demon queen and a butler who is also a demonic hero unit. I just love when fantasy settings make demons sophisticated and ruthless. I like the whole “all other beings are inferior” vibe that these type of demons have going for them. It reminds me of Demiurge from Overlord. I don’t exactly consider myself edgy, but I tend to really enjoy edgy things when it comes to fantasy settings. Or maybe I just like edgy things in anime (except Divine Gate).

A spoiled brat empress and her “delinquent knight” bodyguard. While it doesn’t exactly mirror Akatsuki no Yona, these two definitely reminded me of Yona and Hak. Only, the empress in this case doesn’t learn to become more humble and less pretentious. Or maybe she does, I haven’t exactly finished the empire’s story! 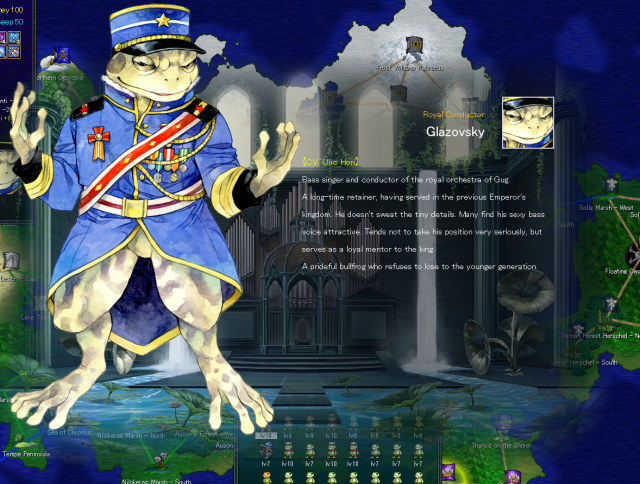 This frog was in an earlier picture, but I wanted to give him some glory here. This frog is a total badass. In all the battles I fought with the frogs, this guy was always one of the last to go down. Guy was a tank, so I’m not surprised he has a cool Russian sounding name to match his awesome imperial outfit. Originally I thought the frogs were a funny race, but this frog made me respect them a little more than that. Glazovsky definitely earned all of those decorations on his uniform.

Finally, this doctor / scientist – Dina. She is a cool character, both in appearance and backstory. Dina is an example of why lab coats are cool. In game she has an ability that creates a giant poisonous cloud – or at least I believe it was her using it against me. She also is a healer, which is very useful. Just like the sophisticated demons, something about a band of thieves is really cool to me.

And that’s all I have to write about Lost Technology. I guess I’m still a little surprised myself to find such a gem of a game for only 5 bucks. It’s no AAA title, but it has a lot of elements to it that are very enjoyable, and it has some great repeat value with the multiple game modes / stories. I already feel like I’ve gotten great value out of it, and I’ve only really scratched the surface of the various game modes. It’s just a fun game to sit down and play for an hour or two after work or whatever. Only 5 bucks!

I’m not normally one to write about anime games, but this one was fun enough and has taken enough of my time already that I wanted to post about it.
Maybe I should look at playing other anime games in the future?

Anyways, until next time!
Thanks for reading. 🙂

18 thoughts on “Anime Strategy Game? Count Me In!”